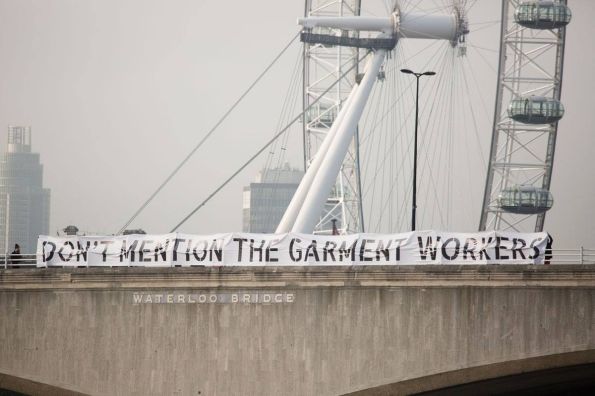 Hello, how are you feeling about the September Equinox? Here in London I'm relieved to see the end of the jarring hype from brands and the media about a 'summer of love' and 'hot vaxxed girl summer' which added to a sense of disappointment when it turned out to be anything but carefree.

This was the summer I caught Covid-19. I was ill for two weeks and off sick for a month with post-viral fatigue (even with two jabs). I still feel cloudy and slow, hence the delay in writing this newsletter. If you haven't already, please get your vaccine and join the campaign for it to be globally accessible.

PROFIT AT ANY COST

One of the first things I did after emerging from hibernation was join a panel of speakers at a War On Want event at the British Trade Union Congress. This was a chance for me to talk about current labour struggles in the fashion industry. Two things stood out as I was writing my notes on Bangladesh, Myanmar, Honduras, and Los Angeles - 1) Jeeeez the industry is chaos; 2) this chaos has a common cause.

Anton Marcus the Joint-Secretary of Sri Lanka's Free Trade Zones and General Services Employees' Union, which represents thousands of garment workers, spoke about the fight to protect people from Covid and to unionise the Next clothing factory. Then Rob Johnston from TUC Midlands talked about factories in Leicester where workers are caught between giant brands and unscrupulous factory owners. Sri Lanka and Leicester are over 5,500 miles apart but face the same issues - marginalised migrant workers who are mostly women, unsanitary conditions, poverty wages, and anti-union laws.

To tie this together, My Quote Of The Month comes from Riccardo la Torre of the Fire Brigades Union who spoke of the need for the labour movement to work together towards long term solutions to exploitation:

"We have to realise that capitalism and its ruthless drive for profit at any human cost is the root of this picture - so whether you're a garment worker in Sri Lanka, a brickie in Bulgaria or a firefighter in Essex, we're all under threat, it's a shared struggle among workers."

Time after time, crises like Covid show capitalism to be a failed system that cannot adequately feed, house, clothe or care for the human inhabitants of this planet, let alone create any form of harmony with the biosphere. Ricardo's talk was a good reminder that instead of always crashing from one crisis to the next, we must think systemically and link up these struggles around the globe.

You can watch the full video by clicking here.

These are some of the things I am keeping my eye on in the industry right now:

Okay, enough from me, this afternoon I am continuing to work on the second edition of Stitched Up. I am now over half way through the manuscript having agreed a new deadline with Pluto Press.

Thank you for signing up and please spread the word to anyone you think might be interested. This fledgling newsletter is still an experiment so I'm very happy to hear suggestions for what you'd like to read about.